CMS announced proposed policy changes for Medicare payments under the Physician Fee Schedule (PFS) and indicated that it will waive the 60-day publication requirement for the Final Rule and replace it with a 30-day notification. This means that the Final Rule will be effective January 1, 2021 even though it may not be published until December 1st. If implemented, one of the most significant provisions includes material changes in the Resource-Based Relative Value System (RBRVS).

The RBRVS changes are proposed to achieve two primary goals:

These goals will be accomplished primarily through two changes:

The net impact to Medicare expenditures will be budget neutral. However, individual physicians will observe wide swings in WRVUs and Medicare reimbursement. Reimbursement from commercial payers could also be impacted if those contracts are tied to Medicare rates.

Impact on WRVUs and Physician Compensation

Table 1 illustrates the estimated impact on WRVUs on selected specialists, whereby the largest increases are expected in the more office-based specialties. 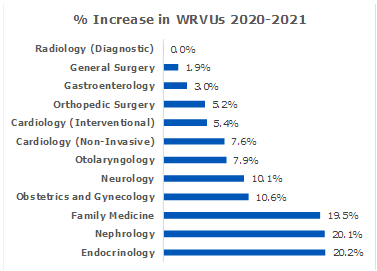 1 Source: Veralon analysis based on 2021 PFS proposed by CMS and the procedure frequency distribution by specialty as reported by Medical Group Management Association.

WRVUs for most physicians will increase at least somewhat. But reimbursement will only be redistributed, and the impact will vary based on your mix of physicians.

The impact of these changes may be summarized as follows:

We believe health systems need to take proactive steps to understand and potentially mitigate the negative financial impact caused by these compensation changes.

What Can You Do?

This will be an iterative process whereby organizations may need to ultimately make material changes to their compensation plans.  In the meantime, we suggest several actions for consideration.