Medicare Shared Savings Program 2015 Results and the Future of ACOs

To date, just under one-third of accountable care organizations (ACOs) have been eligible to share in savings.  This situation is changing somewhat as ACOs gain experience in managing populations of patients for high quality and low cost healthcare.

As of 2016, nearly 50 percent of Medicare lives were covered in non-traditional arrangements, including Medicare Advantage and Medicare ACOs. An estimated 9 million of the total 56 million Medicare lives (16%) are in an ACO. Ninety-two percent of the 473 Medicare ACOs registered in 2016 are participating in the Medicare Shared Savings Program (MSSP), with the vast majority participating in the non-risk bearing arrangement known as “Track 1”.  As in 2013 and 2014, the majority of MSSP ACOs in 2015 failed to share in savings; however, performance is improving somewhat. Although over half of MSSP ACOs (52%) spent less than their benchmark, only 31% of MSSP ACOs were able to reduce costs enough to receive a share of those savings from CMS.

Percent of MSSP ACOs Sharing in Savings, 2013 to 2015,
and Average Gain Per Beneficiary 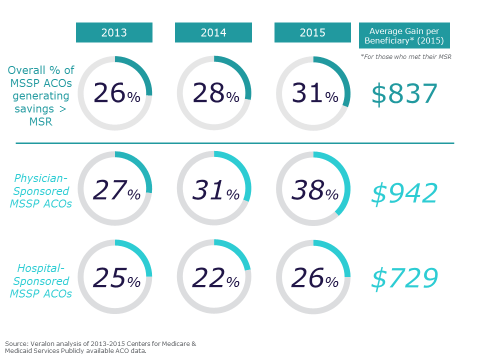 Results from 2015 strongly suggest that more years of experience in managing population health contributes to greater success. Of the 120 MSSP ACOs that shared in 2015 savings, 101 (84%) have been in the program for more than a year. It is possible, of course, that less successful ACOs dropped out of the program.

Despite mixed performance and the historical preference for Track 1 (non-risk) ACOs, there is a chance that we will see a shift in ACO participation towards MSSP risk-based models such as Track 2, 3, and Next Generation ACOs. These ACO tracks qualify as Advanced Alternative Payment Models (APMs). Advanced APMs avoid the MIPS reward and penalty system, and provide some access to a 5% lump sum bonus. For an explanation of ACO strategies for MACRA see our Veralon View from September 2016.