Due Diligence: Not All Risks Are Equal

A prudently conducted due diligence effort will surface a comprehensive (and often lengthy) list of potential risks and issues related to the transaction being assessed. However, the implications of these risks will vary widely. In the thick of due diligence, it often seems that finding issues and risks is the ultimate goal. It can be easy to lose sight of the reality that the “finding” part is merely one element of a process that is intended to serve broader objectives, including:

Once risks are identified, they should be thoughtfully categorized to serve these objectives while retaining focus, meeting transaction timeline objectives, and leveraging the efforts of those involved.

To make sense of what can be an extensive laundry list of risks and issues, it can be helpful to assess each one for its potential to threaten “Deal Execution” and “Deal Value,” as shown in the Deal Risk Matrix [Figure 1]. The matrix categories are discussed below. 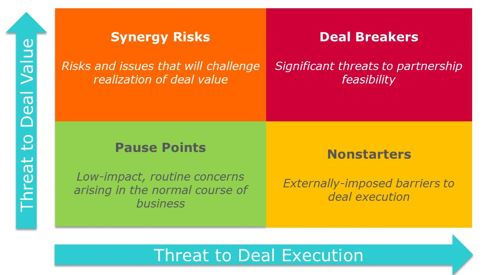 Nonstarters: Nothing Else Matters–It Won’t Get Off the Ground

While it is uncommon to get as far as the due diligence phase before uncovering Nonstarters, it occasionally happens. As the name suggests, these carry the highest deal execution impact, outside of deal value consideration.

These risks are typically a result of independent, externally-imposed barriers to the transaction. Examples include major restrictive covenants established by other partnerships/arrangements to which the subject organization is a party, or significant antitrust concerns arising from a deeper exploration of the subject and its current and prior ventures and activities.

Deal Breakers: High Risk All Around

Deal breakers are risks that so deeply threaten the feasibility of the transaction and the ability to realize the deal’s intended value, that they may threaten deal execution. Common deal breakers include:

Deal breakers must be exhaustively investigated to provide the buyer with sufficient information to decide whether to move forward with the transaction.

Synergy Risks: Proceed with Caution, and Develop a Plan ASAP

Synergy risks are generally benign from the point of view of executing the transaction, but pose a more substantial threat to realizing the deal’s intended value. Such risks and issues include observed decline in financial performance, and items such as:

Synergy risks should be appraised from both a strategic and financial perspective to determine what post-transaction integration efforts may be required to manage/mitigate those risks; developing a plan to do so is fundamental to addressing synergy risks.

Pause points are low-impact, routine concerns, or potential concerns, arising in the normal course of business. Commonly, the concern presented by pause points is addressed via transaction benefits. Common pause points include:

Due diligence findings of this nature should cause the buyer to pause and take note, but pose little (if any) threat to moving forward with the transaction, are unlikely to trigger high-priority post-transaction integration and planning activities, and may ultimately present an opportunity.

The ultimate success of any deal relies upon the ability of both parties to mitigate risks and resolve issues together. Doing so means taking a strategic approach to due diligence by developing an approach that furthers the ultimate objectives of the process and serves the ultimate goal of building a future together.