Case Study: Strategies For Safety-Net Hospitals in an Era of Health Reform

MMC has historically played the role of the safety net hospital in this urban setting, relying heavily on state and federal funds to finance patient care. This reliance on government funding, coupled with increased local competition, posed major challenges for MMC. Veralon helped create a strategic plan that addressed the challenges created by healthcare reform and increasing competition. Veralon guided MMC through the creation, prioritization, and resource allocation processes that will allow the hospital to provide quality, accessible services to the community. 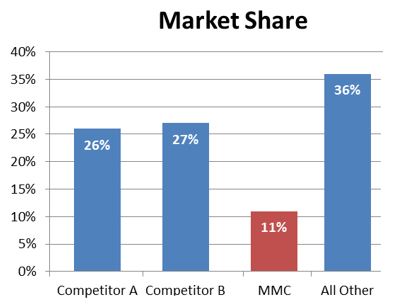 Historically, these two systems had worked in a type of symbiosis with MMC. The dominant systems were content to let MMC take self-pay patients (31% of MMC’s patients) while they exerted market dominance over the Medicare and managed care populations, as shown in the figure here. 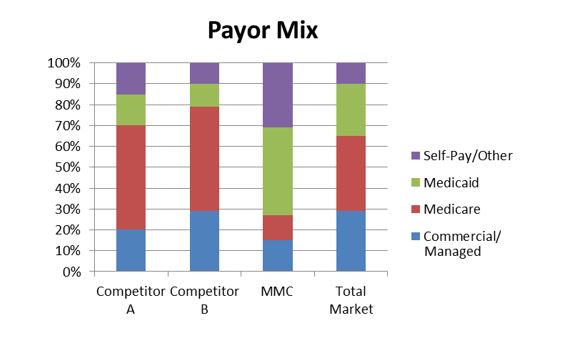 The impact of health care reform has the potential to undercut the historical role and future success of MMC in two principal ways. First, the increased availability of insurance coverage through Medicaid expansion and private exchanges means that newly-insured patients will become more attractive to MMC’s competitors. Second, MMC faces the risk of state and federal funds, once paid to MMC for the disproportionate share of uninsured and under-insured patients, disappearing while also experiencing dwindling support from the local government. MMC’s continued existence depended on strategies to focus their efforts and resources on a few critical initiatives that could drive the most change.

When Veralon began examining MMC, we found the organization struggling to move forward with its strategy; a multitude of initiatives in varying degrees of maturity and commitment were being planned and developed with minimal success. Due to management capacity and capital resource constraints, there was little bandwidth available to successfully address so many competing priorities. As a result, very few initiatives were being implemented, and those which were, either were not well connected to the overall strategic plan, or overlapped in scope.

Veralon’s first step was to assemble a comprehensive list of all of the strategic initiatives that were currently being considered for implementation, both from its existing plan, and from management as a result of recent changes in the competitive landscape. Veralon assisted MMC in systematically dividing these initiatives into three categories that were aligned with the vision and strategic plan of MMC, and ensured that a balanced approach was taken to evaluate its options. These three categories were:

Following the analysis of MMC’s current initiatives, Veralon performed a case study of a best practice safety net hospital. This hospital overcame the challenges that many safety net hospitals face by implementing LEAN processes for a critical, select number of areas which would create the greatest impact on the organization, and focusing on a culture of accountability and respect. This case study further informed strategic planning process by highlighting successful strategies from a high-performing safety net hospital. One such initiative was the expansion of Six Sigma improvements focused on care coordination. The case study hospital increased the number of patients receiving antibiotics at discharge by sixteen percentage points after implementing their own process improvement and care coordination initiatives. These LEAN principles also lead to an immediate increase in collections of $1 million by improving communication between the billing and research departments.

Next, Veralon created a tool to facilitate the prioritization of all current initiatives at MMC.  These initiatives ranged from expanding their medical staff through new affiliations with the local medical school, to developing new service line offerings to fill beds emptied by more efficient models of patient care.  Veralon and MMC hoped to follow the model of the case study hospital and focus efforts and resources around those initiatives that could make the largest impact on the organization. The initiatives were ranked by leadership at MMC across multiple criteria as identified in the figure below. The criteria were split into two weights, primary (those criteria having the greatest impact on mission and vision of the organization) and secondary criteria (other important considerations for the organization). Each of the initiatives was scored on a 1-10 scale across each of the criteria by the leadership team.

Based on the scoring and weights of the criteria, Veralon and MMC were able to identify which initiatives were the greatest priority according to MMC leadership. Perhaps more importantly, these criteria helped identify those initiatives that were most important, and allowed leadership to categorize them as priorities. This allowed MMC to prioritize and focus resources on the most critical initiatives. Once the initiatives were prioritized, MMC could more clearly see where it needed to devote additional resources in order to accomplish its strategic goals, while staying true to the organization’s vision and values. 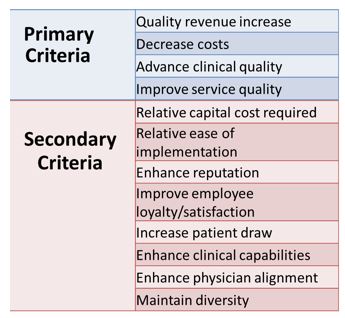 MMC is currently implementing the initiatives that were developed with Veralon’s assistance. Veralon used national best practices, historical experiences, and data-driven decision-making to give MMC a plan to move from a provider of last-resort, to a provider of choice with a stable financial future.